Photo credit: Ioki
Written by
Ioki
When you think of the future of mobility, you see young people racing through skyscraper canyons in futuristic robot taxis in your mind's eye. In reality, most autonomous projects do not drive sleek robot taxis in German metropolises. Instead, ponderous-looking minibuses, so-called people movers, move through narrow alleys and across marketplaces in smaller towns and rural areas.
Main picture 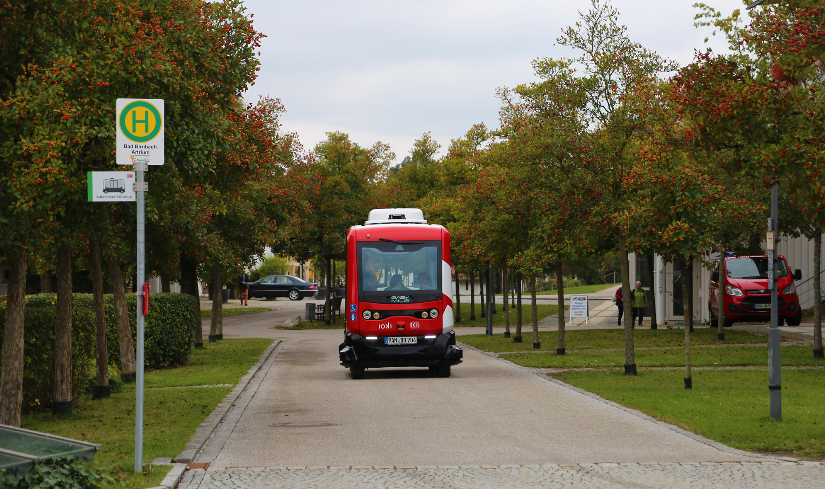 Bad Birnbach has thus written mobility history. For the first time, such a people mover is on the road in regular traffic without a driver, but with a safety operator. Up to this point, autonomously driving vehicles were only on the road on closed or private property. First, the shuttle ran for 700 m between the town centre and the thermal bath. Only one year later, the connection to the local train station followed and realised the first autonomous connection between line transport and rail transport in Germany.

Bad Birnbach opened a new chapter in mobility in May 2022. Since then, two additional autonomous shuttles have been driving to 20 virtual stops in the city area on demand. They are part of the “HEAL Project”. The combination of autonomous on-demand vehicles and autonomous scheduled shuttles improves mobility between the train station and the city centre, bringing tourists and locals to health facilities as well as to shops for daily needs.

This is made possible by the operating system for digital mobility, which transmits the orders to the autonomous line bus and the autonomous on-demand shuttles. The software takes care of the optimal route in the background and bundles the requests of the passengers using an algorithm. The trips can be booked in advance or spontaneously via app and are always free of charge. This ensures fewer empty trips and less traffic in the spa. With the operating system by ioki, which is used in Bad Birnbach, all modes of public transport can be controlled by one software.