European first in the Yvelines: Autonomous, electric shuttles without an on-board operator, in a complex environment 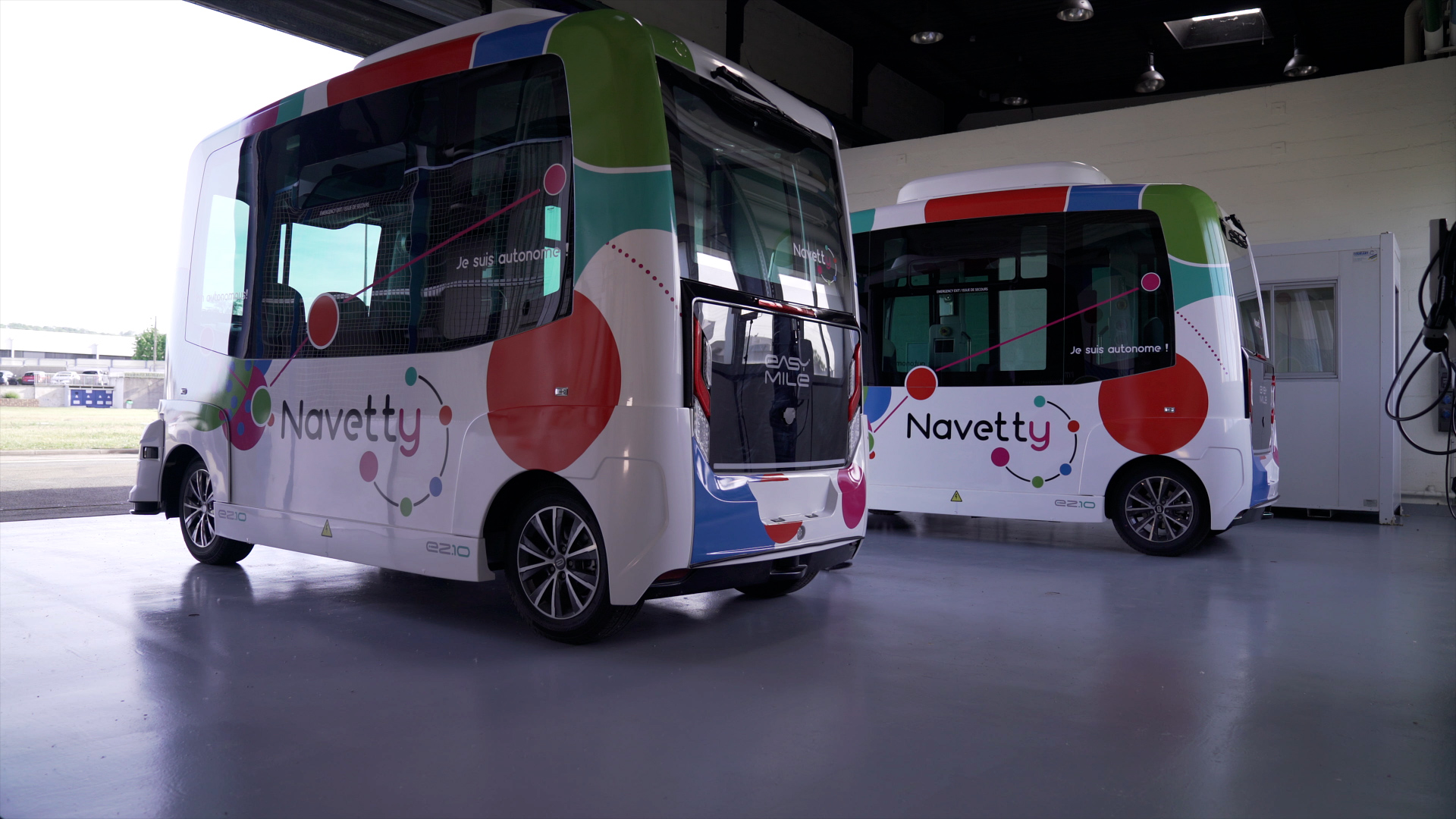 The autonomous and electric shuttles of the Navetty research project, supported by the Yvelines Department, EasyMile, Transdev, ArianeGroup and VEDECOM have been running with an on-board supervizor since their official launch in May 2021 at the ArianeGroup site in Les Mureaux, France. In early November, a new step was taken. The shuttles are now running completely autonomously, without a human supervisor inside the vehicle, marking the first of its kind on a European scale - fully driverless in a complex environment, in normal traffic conditions.

Les Mureaux, France, 15 December 2022 - For the Yvelines department, which has invested 2.5 million euros in the project, the Navetty research program aims to promote industrial R&D in the region, but also to ensure the deployment of these innovations on roads open to public traffic.

"Solving the last mile problem, which many of the region's residents encounter in their daily travels, is also a priority objective, and is fully in line with the strengthening of the region's mobility investment policy. This autonomous shuttle service should eventually provide an optimal connection to the future RER EOLE stations. The department is also continuing to support the strengthening of links between the aeronautical, technological and automotive industries, which are very present in the region," explains Maxime Rabasté, Director of Environment and Development position at the Yvelines department.

Two shuttles, developed by EasyMile and operated by Transdev, run daily on routes of up to 6.6 km to enable ArianeGroup employees - up to 10 passengers per trip - to travel around the 92-hectare site, while guaranteeing service quality and safety. Since the launch, more than 50 daily trips have been made, covering 23,000 kilometers in complete safety.

The ArianeGroup site is the ideal launch pad to future deployment on an urban scale. It brings together all the complexities of a city. The shuttles are integrated into a shared environment where pedestrians and vehicles circulate, without modifying existing infrastructures or dedicated lanes. The route integrates traffic circles, intersections, a tunnel and 18 stops spread throughout the site

For Benoit Perrin, General Manager of EasyMile: "We are proud to have a reliable and relevant service for ArianeGroup employees, on such a complex site and in a totally autonomous way. Autonomous shuttles reinforce the attractiveness of public transport, by offering practical and safe collective mobility solutions. Our technology is ready to be deployed on sites of this scale and other sites will soon follow Ariane's example."

One remote supervizor for 3 autonomous shuttles

The autonomous shuttles were deployed progressively over a period of five months, guaranteeing a total level of safety at each stage. A remote supervisor can intervene or interact with passengers at any time from the Central Control Station (CCS), with the possibility of acting when necessary.

The arrival of a third shuttle in January will test the feasibility of supervising a fleet of three autonomous shuttles with a single supervisor, while ensuring safety and service performance.

In addition, it allows planning for the development of a permanent commercial service of autonomous shuttles. This is the only project in Europe in which three shuttles will be supervised remotely by a one single supervisor, without an on-board operator and under normal traffic conditions.

"Through this program, Transdev is preparing to operate the first commercial autonomous shuttle services. From the training of supervisors to the deployment and operation of the service, we are applying our business expertise to achieve the same standards of safety and quality of service as in our fleets of driven vehicles," says Virginie Fernandes, Director of Strategy and Transformation for Transdev Group.

With the initial technological goals achieved, efforts will focus on developing the service for ArianeGroup employees. A mobile application for on-demand reservations is set to be launched in early 2023. Employees will be able to order a shuttle directly from their location thanks to an integrated geolocation system. "Navetty has been part of the life of our site for a year and a half and is now preparing to go out into the city to eventually extend the service offered to our employees. True to its innovative and pioneering spirit, the ArianeGroup site in Les Mureaux is proud to actively contribute to the development of autonomous urban vehicles," explains Hugues Emont, Director of the ArianeGroup site in Les Mureaux.

The Navetty project will continue to progress, with the launch in 2023 of a route on an open road between the Mureaux train station and the ArianeGroup site. This will be an opportunity to test the implementation of a "last mile" service and to reflect on the next stages of deployment.

For Eric Lebeau, VEDECOM's Managing Director, "the Navetty program is a concrete illustration of VEDECOM's mission to encourage and federate innovation in the mobility ecosystem, by bringing together territories, manufacturers and transport operators in this European first. As part of this program, VEDECOM will soon be experimenting with two cooperative driving scenarios between infrastructure and vehicles through the implementation of an intelligent traffic circle where disembarked perception followed by a collision risk analysis will make it possible to communicate maneuvering instructions to the shuttles, thus further improving safety and optimizing the time taken to pass through the traffic circle. One more step towards the safe deployment of shared automated vehicle fleets."

ABOUT VEDECOM
The Institute for Energy Transition (ITE) VEDECOM is a public-private partnership foundation dedicated to innovative and sustainable mobility, i.e. more ecological, more autonomous and better shared. It has been commissioned by the French government, via the ANR, to support technological innovation and the French industrial sectors involved in the mobility of the future. Based on an unprecedented collaboration of more than 50 players, it brings together academic institutions, local authorities and various private players impacted by the evolution of mobility: automotive, public transport and mobility, logistics, road infrastructure, telecommunications, energy, aeronautics and defense, digital services and simulation, and insurance. This central role as a trusted third party enables its members to work together to accelerate innovation and the deployment of new solutions. Through its three areas of multidisciplinary R&D, electrification, autonomous and connected vehicles and new mobility and shared energy solutions, VEDECOM provides a systemic vision of the vehicle, its environment and the deployment of new mobilities.
For more information: www.vedecom.fr

ABOUT THE YVELINES DEPARTMENTAL COUNCIL
The Departmental Council, a local institution serving nearly 1.4 million inhabitants in 259 municipalities, assists all the people of Yvelines at various stages of their lives. Social support, regional planning, mobility and education through the colleges are its major structuring projects. The Department works to improve the daily lives of the people of Yvelines thanks to its deliberative Assembly composed of 42 councillors and its 3,800 agents spread throughout the territory. In 2019, the Department is investing €420 million, or €287 per inhabitant. The main investments concern infrastructure and public transport, colleges, solidarity and social action, territorial attractiveness and the financing of development projects. For more information: www.yvelines.fr

ABOUT EASYMILE
EasyMile is an industry leader in autonomous technology. The company develops software to automate transportation platforms without dedicated infrastructure. EasyMile's cutting-edge technology is revolutionizing passenger and freight transportation by providing completely new mobility options. Its passenger shuttle, the EZ10, provides first- and last-mile transportation on private sites or public roads. EasyMile is also developing theTractEasy, an autonomous cargo tractor for logistics and airport sites. Since 2014, EasyMile's cutting-edge technology has been deployed at more than 300 sites in over 30 countries. EasyMile relies on the support of its strategic partners and minority shareholders, Alstom, Continental and Bpifrance.
For more information: www.easymile.com

As a global mobility operator and integrator, Transdev enables everyone to move freely.
Transdev is a leader in the operation of autonomous mobility services with more than 3.5
million passengers transported worldwide. Transdev relies on Transdev Autonomous

Transport Systems, a dedicated expert entity developing the technologies and services
required for the daily operation of fleets of shared autonomous vehicles, in the context of
public or private transport services. We are proud to provide 11 million passenger trips on
average everyday thanks to efficient, easy to use and environmentally-friendly transportation
services that connect people and communities. Our approach is rooted in long-term partnerships
with businesses and public authorities, and in the relentless pursuit of the safest and most innovative
mobility solutions. We are a team of people serving people, and mobility is what we do. Transdev is
jointly held by Caisse des Dépôts Group (66%) and the Rethmann Group (34%). In 2021, with some
82,000 employees in 18 countries, the Group generated total revenues of €7 billion. For more
information: www.transdev.com

ABOUT ARIANEGROUP
ArianeGroup is a prime contractor for civil and military space launch vehicle systems. It is responsible for the design, production, integration and flight preparation of the Ariane 5 and 6 European launchers, marketed and operated by its subsidiary Arianespace. It also designs, manufactures, integrates and provides operational maintenance for missiles used by France's ocean deterrent force. A world-renowned specialist in innovative, competitive solutions, ArianeGroup has mastered the most advanced propulsion technologies for launchers and space applications. Through its subsidiaries, it also brings its expertise in equipment, services, space surveillance and critical facilities to other sectors. A joint venture equally owned by Airbus and Safran, ArianeGroup employs about 7,000 highly skilled people in France and Germany. The group's consolidated revenues in 2021 are expected to reach €3.1 billion. For more information: press.ariane.group 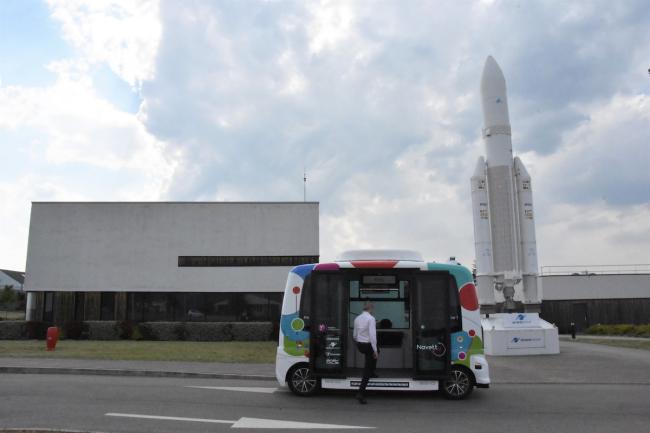