DEKRA & EasyMile
Written by
DEKRA & EasyMile
Bringing the future to the roads right now and seeing what is possible – that is the aim of the “RealLabHH” project being run by the National Platform for the Future of Mobility (NPM) in Hamburg. That is why three self-driving e-shuttles have been making their way around the district of Bergedorf since mid-September 2021. YVONNE KÖHNE from DEKRA is responsible for automated/autonomous driving and puts the EasyMile EZ10 through its paces.
Main picture 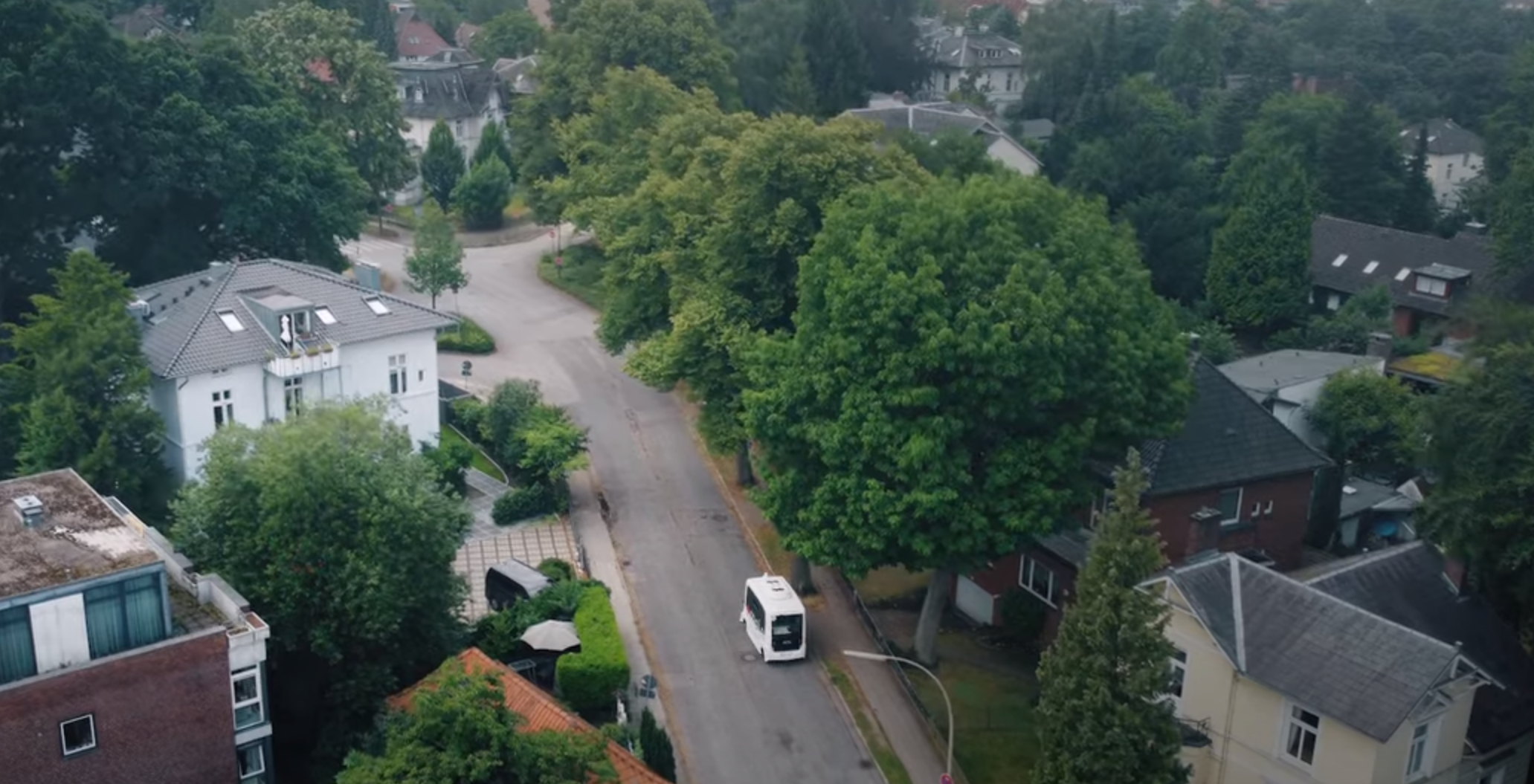 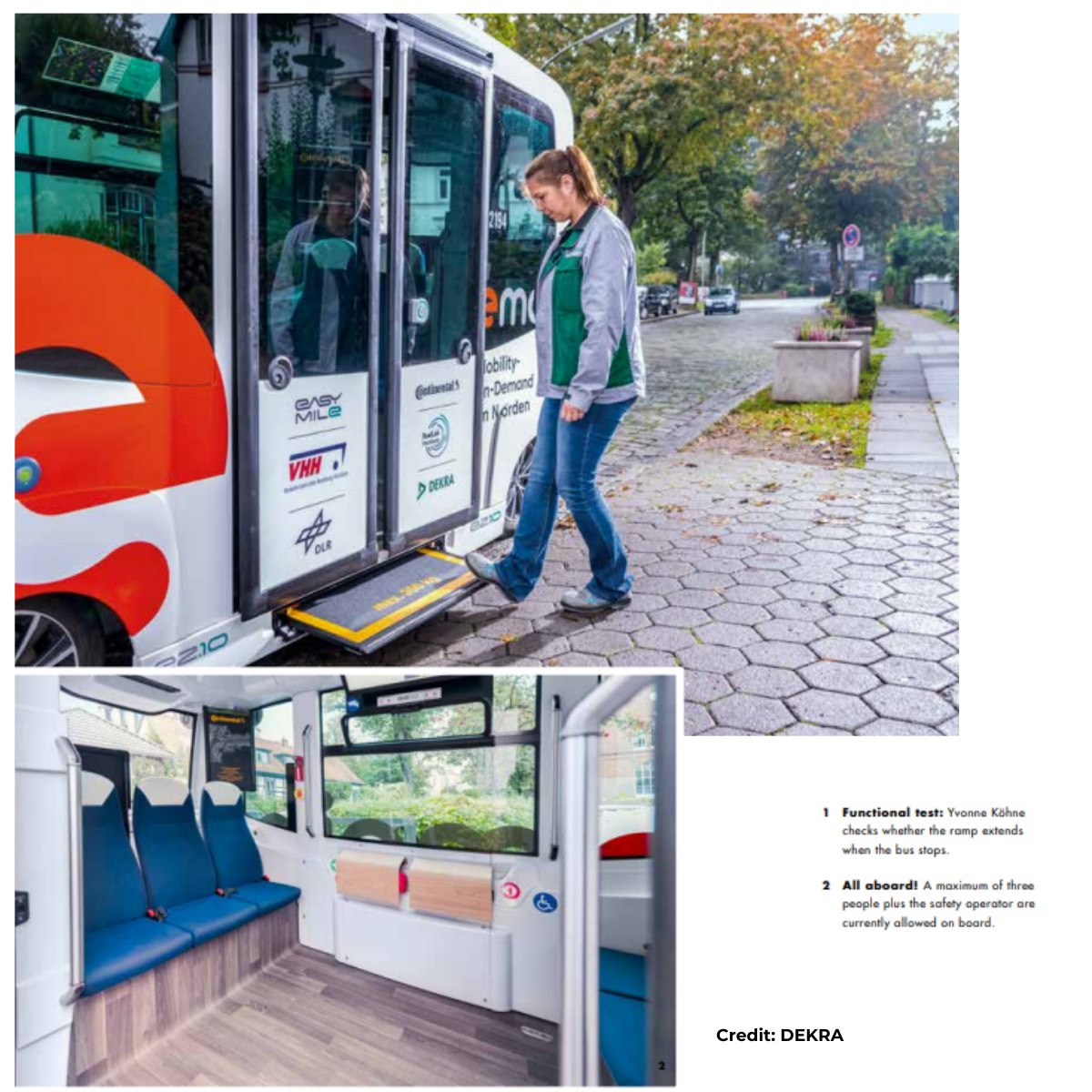 The people of Hamburg are famous for their “Moin, moin!” greeting. So what better title to give the e-shuttle project than the catchy name “eMOIN”? And in keeping with the typical “Moin, moin!” greeting, there really are a lot of passers-by who are interested in the futuristiclooking minibuses, which silently make their way around the district at around 18 kmh, only making a ringing sound when stopping and moving off, just like the streetcars used to do. They can take a maximum of six passengers, although only three plus the safety operator are cur - rently permitted due to coronavirus restrictions. “Can we get on?” ask both old and very young people as soon as the vehicle comes to a standstill by the side of the road. And: “Can we take a ride?” or “How much longer is the project going to run?” Sinan Eligüzel, operator (also known as a safety operator) from the transport company Verkehrs - betriebe Hamburg-Holstein (VHH), deals patiently with all of the requests. He occasionally lets a group of young people travel with him for a few hundred meters. At other times, he will help residents of a retirement home into the e-shuttle to take them to the market.

“We have had a really good reception; around 70 to 80 percent of people have a positive attitude toward it. That is the main thing,” says the delighted young man. He was originally a bus driver before switching to the IT department at VHH. A few months ago, he was asked whether he felt like doing something “completely new.” “And this is where I have ended up,” he says with a grin.  He is one of three so-called safety operators who are fully committed to the e-shuttles. During the journey, he stands on a marked spot in the passenger compartment and steers the vehicle manually using a joystick if necessary. 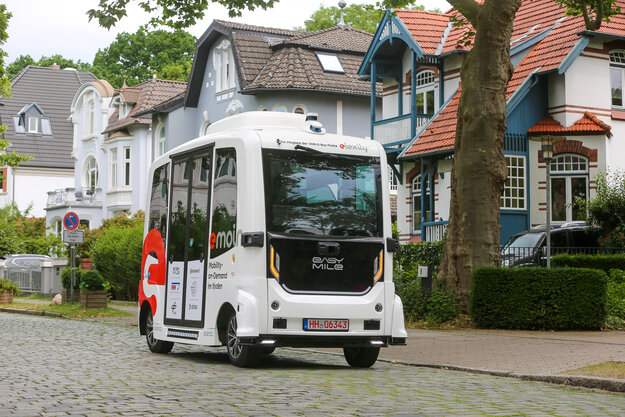 In the course of today’s mandatory morning check – which includes testing the brakes and cleaning and testing the sensors (camera, radar, lidar) and the lights – he is joined by DEKRA team leader Yvonne Köhne. The 46-year-old has been working in the Whole Vehicle department at the Technology Center Klettwitz since 2013 and is currently responsible for the ADAS (Advanced Driver Assistance System) team and cybersecurity, which is why she is so familiar with the shuttles manufactured by the company EasyMile.

“My colleague Mario Zweig, homologation team leader, and I have been working with the French manufacturer for a long time. We have already tested and homologated many of these vehicles in Klettwitz and approved them for service on public roads,” she explains. The shuttles are being used in Frankfurt, Kelheim, Berlin, and Wusterhausen, among other places, with individual vehicle approval issued by DEKRA. The EasyMile used in Hamburg is the third generation of the shuttle. In her role as project manager, Yvonne Köhne always has to see the vehicles in action for herself in the area where they operate.

So what is so special about the “eMOIN” project? “Firstly, the 7.3-kilometer route and thus the area covered by the network (roughly two square kilometers) is bigger than anywhere else. Another special aspect is the pilot use of the MK100 braking system from Continental. The brake-by-wire system has been installed to make sure that the unmanned vehicles brake safely and comfortably under all operating conditions. And, last but by no means least, there is the integration of the app: Those who download the eMOIN app on their smartphone can use it to order one of the three e-shuttles to stop .

The idea behind “eMOIN” is the so-called “last mile” – the link between the station or bus stop and the user’s home. One possible use: Transporting elderly people who want to be taken to their retirement home and are no longer quite as good on their feet. Or transporting people during the night when there are hardly any passengers and it
is barely worth running a manned vehicle. After all, the vehicle doesn’t need a set timetable or shift pattern in its final stage of development.

right outside their front door. Completely separate from any timetable. In other words, on demand. As if by magic, it then turns up at the agreed time and stops by the side of the road. In most cases, it takes its passengers to the nearest transport hub, a bus stop or a train station.

The project partners recorded a peak figure of 127 bookings per day in the eMOIN app in the first week. Then it is back to the depot for the small group. The DEKRA expert and the VHH drivers discuss their experiences of the first week of operation over a cup of coffee.

You want to learn more about the project? Read the full story here: https://www.dekra.com/en/moin-moin-emoin-e-shuttle-in-the-test/ 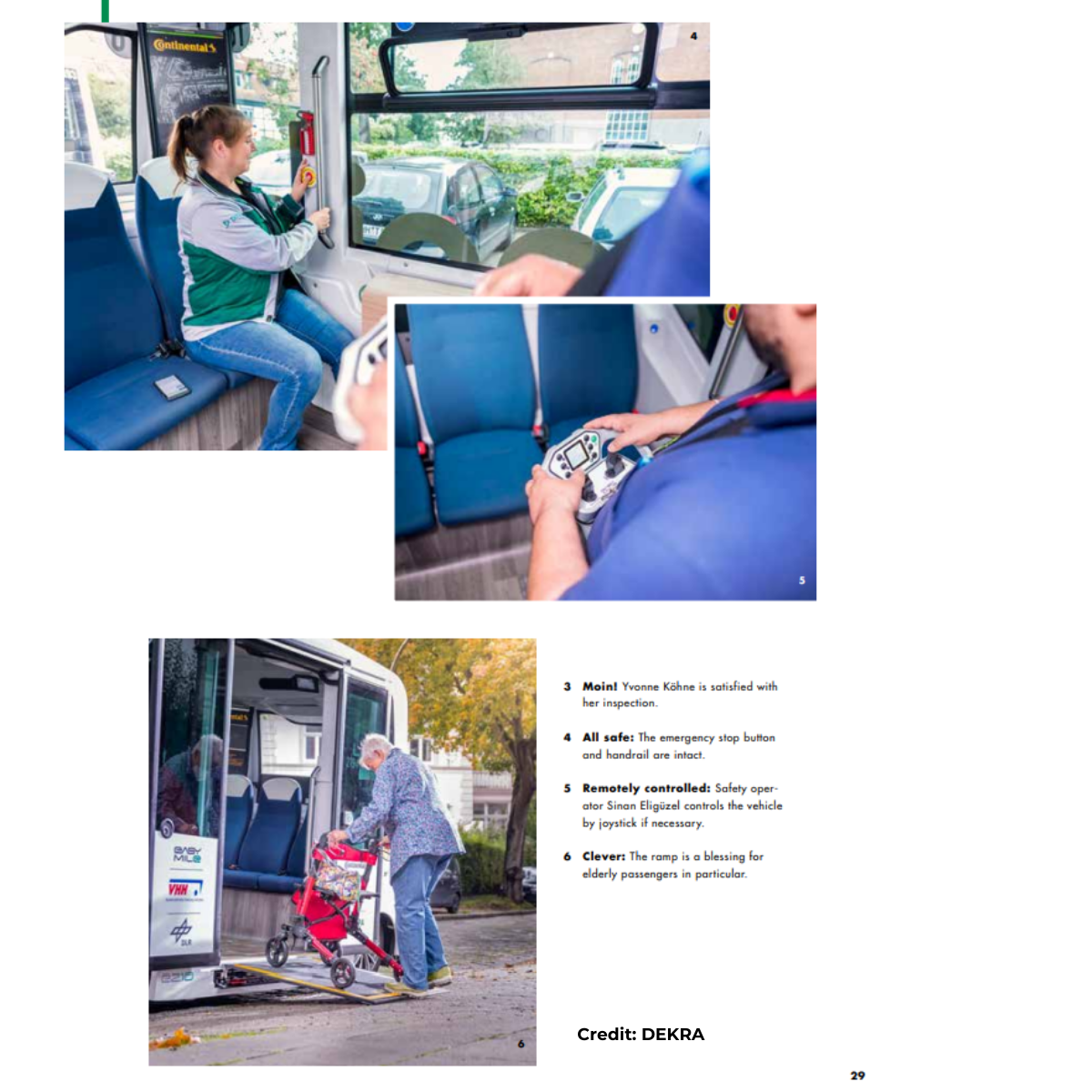