All Weather Performance for Autonomous Driving On The Road In Norway 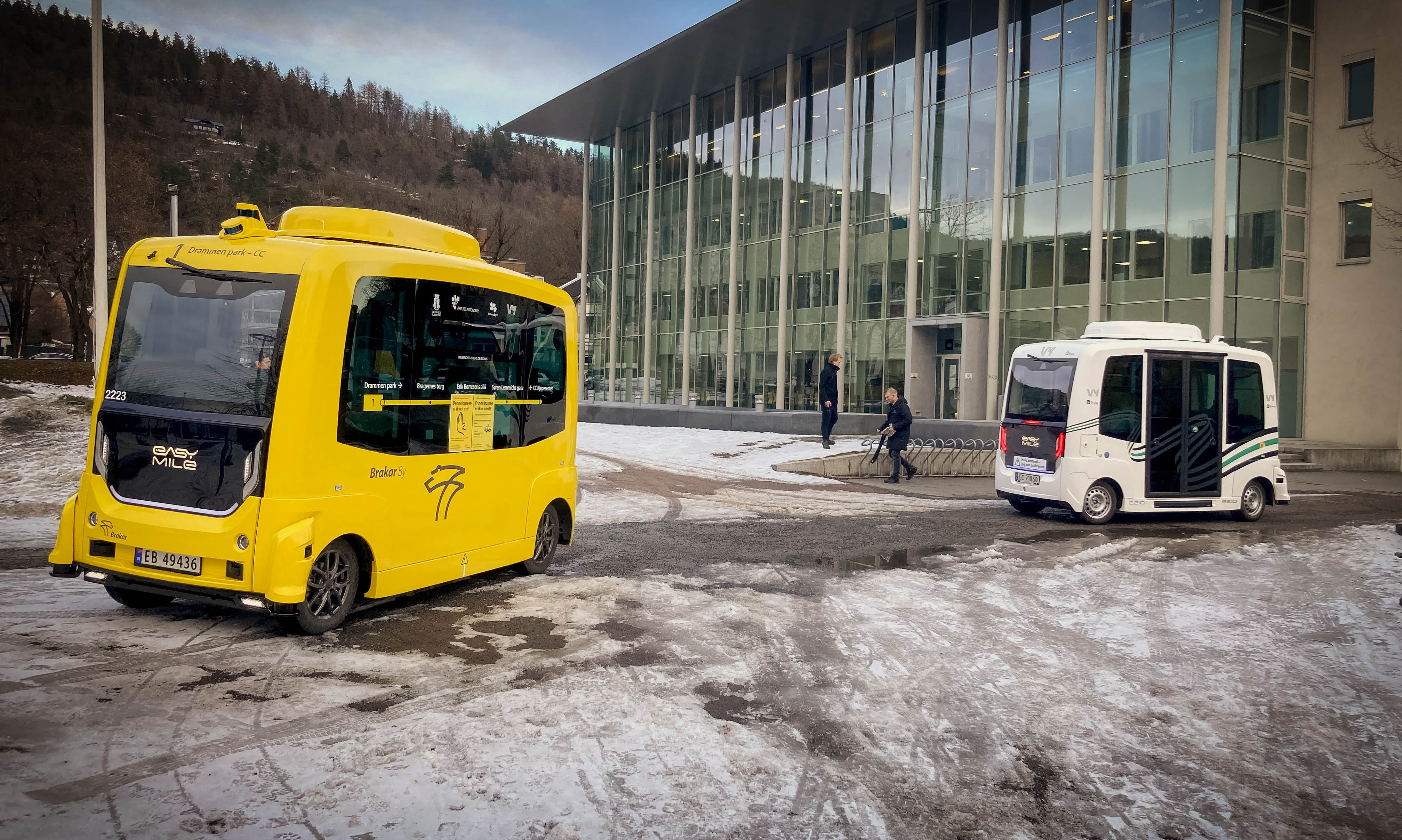 An international partnership between EasyMile and Applied Autonomy has enabled operations with enhanced all weather features for autonomous driving in port and river city Drammen, near Oslo.

In collaboration with transport operator and provider Vy and Brakar, new software is being deployed on an autonomous shuttle which has been running as Route 1 (“Linje 1”) since August 2021 in Drammen, Norway. This latest software focuses on providing a reliable, and even more autonomous service for transport operators and passengers alike with features particularly relevant to Nordic conditions including enhanced ground perception and enhanced rain and snow filtering.

The roll out in Drammen is the final phase after 4 months of testing in real-life environments, thousands of simulated cases and nightly code-testing, for minimal impact on the ongoing operations.

Of particular benefit to Norwegian communities, the evolved features mean:

Drammen’s Route 1 is a joint project between Applied Autonomy and EasyMile. The partners worked closely together in order to provide one of the most advanced public transport services in Norway, both building on their expertise with cutting-edge developments in the domain of autonomous vehicles.

In the first phase of the project, Applied Autonomy worked closely with Vy and Brakar to establish an optimal route for the autonomous shuttle. The company also provided their expertise for designing the tests for the current roll out. A second shuttle was used during the tests in order to be able to continue running the service.

Following the completion of the first phase, seasoned EasyMile engineers are now onsite in the south-eastern city as part of the company’s certified and process-based approach to safety and quality.

Applied Autonomy ensured a seamless integration of the autonomous vehicle into Applied Autonomy’s xFlow platform, providing a comprehensive control system. This control system allows transport provider Brakar to track the improvements that are made thanks to EasyMile’s updated software.

Norway at the forefront of autonomous driving

Norway is a very early adopter of autonomous driving and tests such as the ones in Drammen raise awareness about the ongoing technological progress. Local communities play a key role in giving real feedback from end users as well as from the cities where the technology is being scaled up to match their expectations. They help providers such as Vy and Brakar consistently meet customer and regulatory requirements, while demonstrating continuous improvement.

Leaders in all-weather for scalability

EasyMile and Applied Autonomy are further using their partnership to work on autonomous logistics vehicles in all-weather conditions as part of the European funded AWARD project.

Recognising that automated transport - be it of passengers or of goods - requires high levels of operability in order to be able to achieve the desired economical results, efforts are made on all sides to improve the technology and allow it to become ever more beneficial. This becomes all the more important as the use of autonomous vehicles happens on a larger and larger scale.

The new features showcased in Drammen will be rolled out globally in EasyMile’s latest software release in the coming months. It is a critical component of the technology company’s roadmap. Applied Autonomy, in turn, continues with its plans to improve and expand its xFlow platform to leverage the power of connected, autonomous vehicles.

EasyMile is a leader in software and complete solutions for driverless goods and passenger transport, and the number one provider of autonomous shuttles in the world. It partners with blue-chip manufacturers to autonomize their vehicles with award-winning technology built on safety-by-design, ready for deployment today, with clear client benefits.

Since 2014, the company has become known for quality delivery and real-world deployments. EasyMile’s proven technology has driven autonomously in 300+ locations in more than 30 countries, over 1,000,000km.

With several mass operations around the world EasyMile was the first to deploy fully driverless at Level 4 of autonomous driving. It is also the first autonomous vehicle solutions provider to be ISO 9001:2015 certified.

EasyMile has more than 250 employees in five locations (Toulouse, Berlin, Denver, Singapore and Adelaide), doubling its headcount every 2 years.

Applied Autonomy’s mission is to extend the smartness of autonomous vehicles and enable safe and sustainable transport of both goods and passengers. Its xFlow platform has been successfully deployed in a large variety of use cases, allowing customers to either integrate autonomous vehicles into their existing operations or set up a whole new service. Use cases range from heavy vehicles in industrial contexts and small-scale maintenance machines to custom on-demand solutions with buses of different sizes.

Based in Kongsberg, Norway, Applied Autonomy has a wide network of international partners in the domain of automated transport. It was noted in KPMG’s autonomous vehicle readiness index as one of the reasons for why Norway scored 3rd place in the 2019 index.

Brakar is the Public Transport Authority  (PTA) in the Buskerud county, situated west of Oslo. Since 2018, Brakar has piloted self-driving technology integrated in the public transport network. A Brakar-lead pilot in Kongsberg was the first self-driving bus route to replace a diesel-bus in regular operations.