Christian Marquordt also writes about his experiences onboard.

Monheim is leading the charge in smart mobility. The regional German town with a population of just over 40,000 has started running autonomous shuttle buses bringing new life to its existing public transport network. Mayor Daniel Zimmermann and NRW Transport Minister Hendrik Wüst gave the starting signal this week. The project is only the second of its kind nationwide.

“This will provide the old town with an optimal connection to the city centre. And the whole thing will be done with this innovative technology. The small buses are ideal for the project,” Mr Zimmermann said. “Mobility must become better and safer,” said Transport Minister Hendrik Wüst. “Automated buses like the ones here in Monheim are the right step. It is the aim of the state government to ensure that such innovations are researched, developed and tested at an early stage in North Rhine-Westphalia. That’s how we get ahead.”

“Monheim is an agent of change for driverless technology. It is cities like this that are showing the world how autonomous driving can benefit communities. The buses in Monheim suit their streets, are electric and so zero-emission, and offer a stress-free way for people to get around,” said Benedikt Sperling, EasyMile’s Managing Director DACH & Eastern Europe. “It is also the first time a fleet of 5 autonomous vehicles has been deployed here which is a great step forward,” he added.

“In local public transport, technology is advancing at a breathtaking pace. Who would have thought five years ago that an automated bus fleet would be used on Monheim’s roads, in regular service”, said Detlef Hövermann, Managing Director of Monheims Bahnen.

The buses run from 7am – 11pm, 7 days a week and the route is just over two kilometres long. It is free of charge for Monheim’s population, like all bus lines in the area.

The rapid implementation of the project is also impressive. In July 2017, the city commissioned the company Amotech with a feasibility study. Already at the beginning of 2018 there were agreements with the state of NRW. In May, TÜV Rheinland was commissioned to prepare an expert report. Two months later the company Blic joined Monheims Bahnen. At the end of the year, EasyMile won the tender for five buses.

The operation is to be scientifically accompanied by a study. The focus is on determining the acceptance of the offer and its effects on mobility behaviour. In addition, operational and planning data from various sources will be analysed.

The history of public transport in Monheim

Local public transport has existed in Monheim for more than 100 years. Because of its location some kilometers away from the next railway station, a “trackless railway” started operation – a very early form of trolleybus operation with very basic vehicles. There were two trolleybuses and two trailers.

Monheim’s “Gleislose Bahn” was not the only one in Germany, but there were not many of these new systems. Another example may be the “Gleislose Bahn” in the Ahr Valley, which connected the then neighboring towns of Bad Neuenahr and Ahrweiler (today merged into the town with the name “Bad Neuenahr-Ahrweiler”).

The “trackless tracks” were not really successful and consequently they disappeared very quickly – none of them experienced ten years of operation. In Monheim it only lasted from 1904 to 1908.

In 1908, in replacement of the “trolleybus operation” between Monheim and Langenfeld, the RWE Group opened an electric light rail that ran from Langenfeld via Monheim to the present-day Monheim district of Baumberg and the Leverkusen district of Hitdorf. Here, not only freight trains but also – with real tram vehicles – “passenger trains” were in operation along the two lines. Both routes ran together from Langenfeld to Monheim, divided at the “Dreieck” (“Triangle”) and then reached their termini in Baumberg and Hitdorf (later extended to Rheindorf).

How it used to be: buses only

In 1963, passenger transport by rail came to an end. At the same time, the “Bahnen der Stadt Monheim” (BSM – Railways of the City of Monheim) founded a bus company, which since then has been solely responsible for the transport of passengers. In 1963, five Büssing Senator 13 and five second-hand buses were in service. The fleet today includes 50 buses: 8 articulated buses, 37 twelve-meter buses – and five autonomous minibuses.

In the center of Monheim, a bus station was located at the “Triangle” as the central point in the network.

With regard to freight transport by rail, nothing has really changed with the exception that “Bahnen der Stadt Monheim” today is only the owner of the infrastructure (since 2014) but no longer the operator of it. Their own two diesel locomotives “Max” and “Moritz” were sold.

Today, BSM is a pure bus operator. However, the old-established name “Bahnen der Stadt Monheim” has remained untouched, although today the abbreviation “BahnenMonheim” is also used.

New beginnings: concession for line “A 01” for autonomous minibuses

On 26 February, the BSM was granted the concession for a minibus line starting from the bus station to the old town center, which runs exclusively on public roads. BSM Managing Director Hövermann states: “This is a temporary and also limited concession. A concession not only gives you the right of carriage, but also the obligation to transport. The limited concession allows us to cancel trips without notice. After all, the technical system of the autonomous bus is completely new to us.” 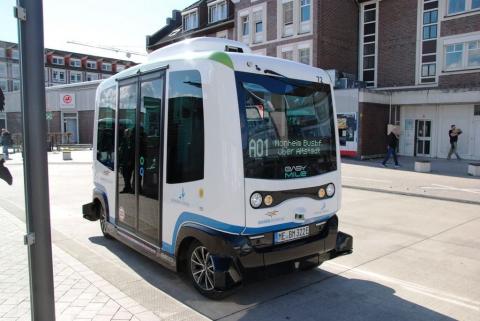 Line “A 01” starts at the Monheim bus station. Via Baumberger Straße it reaches Kirchstraße and continues to the “Evangelische Kirche” stop. Here it turns into the old town, passes Monheim’s landmark, the “Schelmenturm”, and finally reaches the stop “Altstadt” on the banks of the Rhine in a loop ride. From there it continues through the old town and via Kirch- und Baumberger Straße back to the bus station.

Five autonomous minibuses of the type “EZ10” from the French manufacturer EasyMile (BSM-Wagen 72 to 76) are being used. Operations manager Michael Hamann: “We can only operate the line with minibuses. There are places on the route where a full-scale bus simply would be too large.” The vehicles can accommodate 11 passengers. And yet the bus has to be driven with a so-called “operator”, who is explicitly NOT a “driver” because the buses actually drive on their own. The operator on board is still necessary by German law and he/she also takes care that everything runs smoothly.

EasyMile emphasizes that the EZ10 could get to a Vmax of 40 km/h in the future. But regulators are still cautious. So far, they have only allowed the small EZ10 in Monheim a top speed of 16 km/h. But this is not really a problem in Monheim, because most of the roads have a speed limit of 20 km/h to 30 km/h anyway – although in practice this is not respected by most of the car drivers. Hamann: “The only road users who travel at the correct speed on these roads are our autonomous minibuses. Everyone else is driving too fast.”

Line “A 01” runs every 15 minutes seven days a week. A round trip from the bus station takes 30 minutes, so three minibusses on the line are needed, including break time. The other two stand at the old town stop to recharge their batteries.

Parking at the old town stop

The five EasyMile EZ10s are not based at BSMs normal bus depot. Instead, they use regular parking spaces in a normal parking lot at the old town terminus, where their recharging columns are located. Managing Director Hövermann: “Of course, it is not ideal that the vehicles are standing outside of our premises. That’s why we want to build a garage there for our five minibuses.” 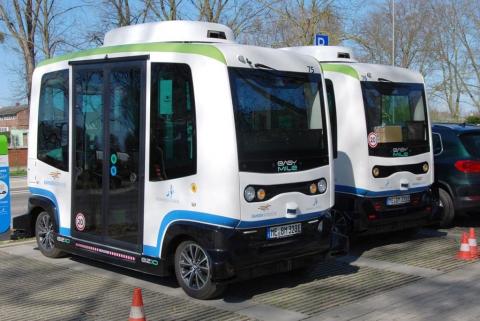 Of course, the author wanted to know what it feels like to be a passenger on an autonomous EZ10 minibus. He drove from the old town to the bus station, informed himself on how the minibuses are actually operated, and then returned to the old town. The conclusion: the minibuses drive very quietly. Passengers are supposed to buckle up because of possible emergency brakes, but this did not happen during the “test ride”. Both vehicles did not brake differently from other buses. This very smooth ride differed significantly from an autonomous minibus which the author tested in Luxembourg in January 2019.

It is noteworthy that the small EZ10, once it comes to a complete stop cannot start again on its own. That’s why the “operator” is still needed: he/she has to judge by him-/herself whether the route is free or not. If so, the bus gets a departure order via a display instruction. The EZ10 acknowledges this with a bell tone as well as with a parallel message to the surroundings: “I’m going now.”

Conclusion of the test drive: the EasyMile EZ10 does what it is supposed to do perfectly and is very capable of providing the services as expected. The outlook is promising.

Managing Director Hövermann reported that after the short time since 26 February, about 240 passengers travel daily on line “A 01”. Without having to pay anything for it: on line “A 01” a zero tariff applies.